Hi everyone, it's been a while since I last posted here so I'm sorry for the lack of updates, but after many late nights in my man-cave, my latest tutorial is now up and online!! I've had lots of fun with this one and heavily inspired by Chris Cunningham's Bjork "All is full of love" video I decided to design and make my own interior set piece in SketchUp that I could render out lots of coverage in Keyshot and create some cool looking shots. I stated with a rough concept after seeing photos of a missile gyroscope, just the coolest looking bit of spherical tech out there, I played with how it would be supported, bars, pistons, cables, but in the end it was such a beautiful pure form I decived make it hover... Next it needed to be in its own space, something that looked secretive, like a testing site silo, with reinforced steel walls and cast concrete blocks. I also wanted to see some industrial robotics operating around it but wanted them to not obscure our focus on the Orb so I suspended them from the ceiling on a circular I-beam.
The set is modeled using the free version of SketchUp (Make) and rendered in Luxion Keyshot where I applied animations to the geometry to perform simple actions like rotations and simple camera move, the new ability in KS6 to animate with depth of field really knocks it out of the park in terms of creating something that feels cinematic. A touch of adjustment in After Effects was needs to help with lighting and colour grading, I was also able to drop in stock footage clips of smoke and blur them slightly To really help with the visual atmosphere. Applying a vignette is also another "trick" that feels cinematic, I often find that we see too much in renders, so most of my work in post is about loosing edges into darkness or light, lighten layers in Photoshop and After Effects work wonders to get back the depth you loose in a render, even depth passes can feel too clinical, they help nothing beats taking a brush and choosing with your eye what to hide and what to reveal...
Music also helps, I spent weeks trying to find a suitable track, I knew I wanted something energetic like dubstep as it complements the accelaraed fast cuts that I had in mind, but I was also looking for something more subtle, ambient and almost beautiful to got with the lead in animations. There are lots of great "cinematic trailer sound" packs on Audiojungle.com and immediately those "warrrrrrrrrrrrm" horn burst went with the reveals, I also found a rumbling bass background track to use that gave a sense of space and atmosphere, or inspired the other and the length of the trailer was growing, I still have ideas for how I would do it if I I did it again but I'd rather store them and move onto the next one, I feel pleased with the result and the response has been very positive which is extremtly rewarding!
So here's the link and video of the tutorial, I hope you like it!
www.gumroad.com/chrisrosewarne
http://youtu.be/Zsd7pzO8PEA
Cheers 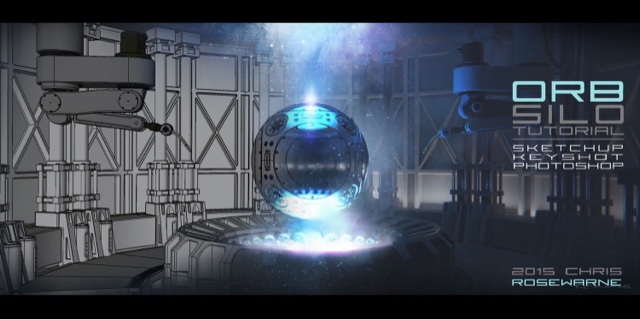 New Tutorial on the way!

Been such a long time since I've posted anything here, had lots of work commitments that had eaten into my person work time... But I've manged to get the next SketchUp tutorial done! It's was great doing it and thanks for the comments, I hope I've covered some questions in this one. I also wanted to focus on building an interesting and well proportioned design in SU, in the time of the "one click photo real render" there's no shortage of uber real renders out there some great, lots not. I wanted this to be a lesson in not being seduced by a glossy render, there's no material indication here, this is pure form, also one of the reasons why I love clay renders so much... I'm putting the finishing touches to it and it should be ready for download on Gumroad in the next day or two, in the mean time here's a little teaser... 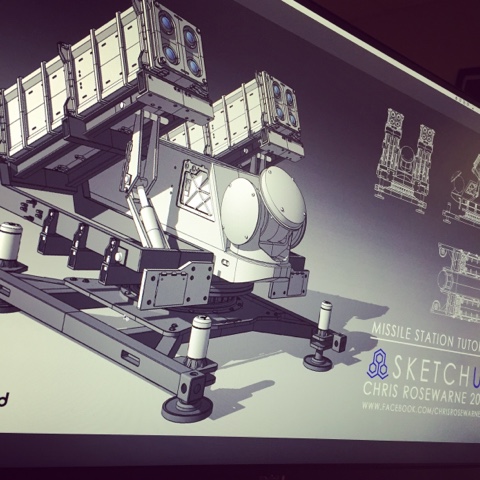 Hi everyone! Just a quick note to say that I've added a new title to my Gumroad tutorial page, "Cinematic Environment Rendering". Check you the new trailer bellow!

In this tutorial I take you through the process I use to integrate a design or 3D asset into an environment to establish context and visually create drama. Using the Close In Weapon System drone I created in the first tutorial I show you how I take a 2D render into Photoshop, alter lighting and colours, explaining how I use adjustment layers and masks for non-destructive editing, then importing, manipulating and colour correcting photo textures to quickly establish a scene and creating drama.

Hi everyone! This post has been in the making for a good few months...

My mech video tutorial is at long last up and ready for download! I will be putting out more now, the next ones with be covering lighting and comping the model into a 2D painted/photo-textured environment to create a more of a cinematic visual. In this tutorial I cover concepting in Photoshop, designing orthogonally and using photo textures, developing the design in SketchUp, rendering in Keyshot before finally compositing in the finished visual in Photoshop.

Check the trailer bellow too. Hope you like it! 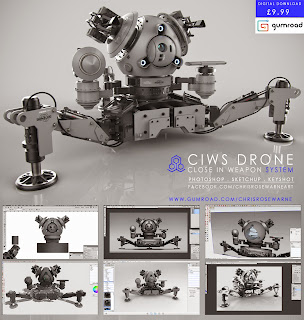 Did this render a while back, thought I'd share it here, tutorial got pushed back due to work commitments but back on it now, into editing for the final push!! 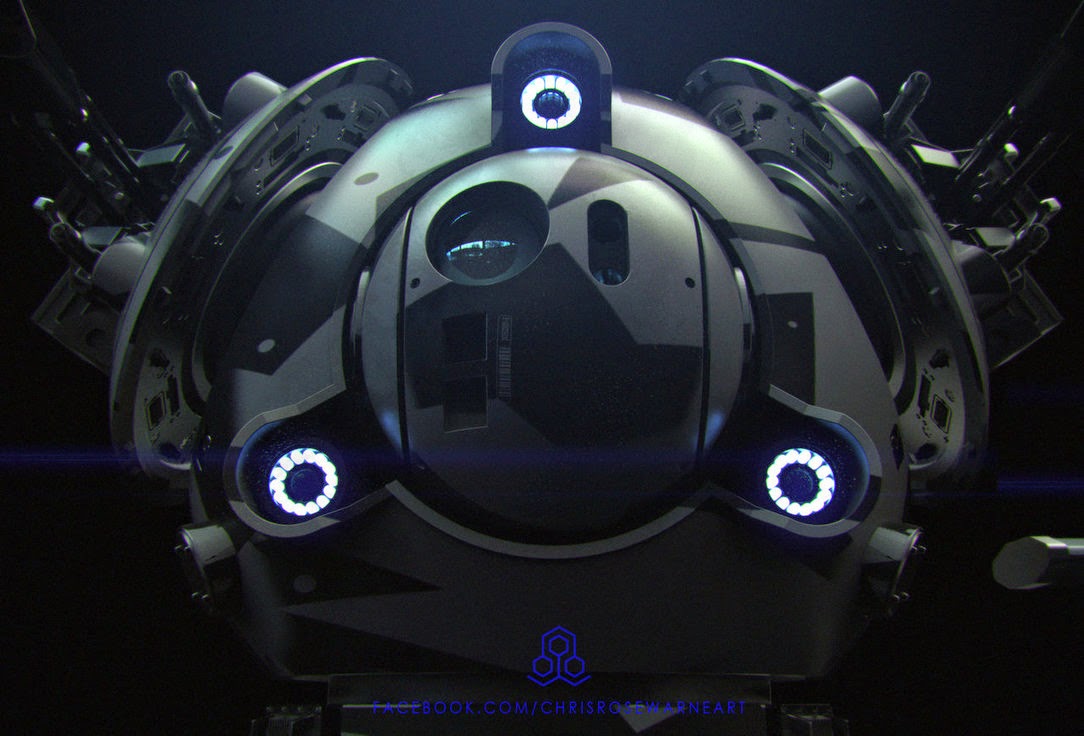 So just when I had convinced myself that I had indeed competed the SketchUp model a good friend and work colleague appraised it with fresh eyes and painted out that those hydraulics would have cables and hoses connecting them. I knew this, but was taking the easy route and for the sake of an extra hour's modelling, there they are - BOOM! Hydraulic cables. I had come this far, it was foolish not to add such a cool techy detail and they really add the finishing touch! 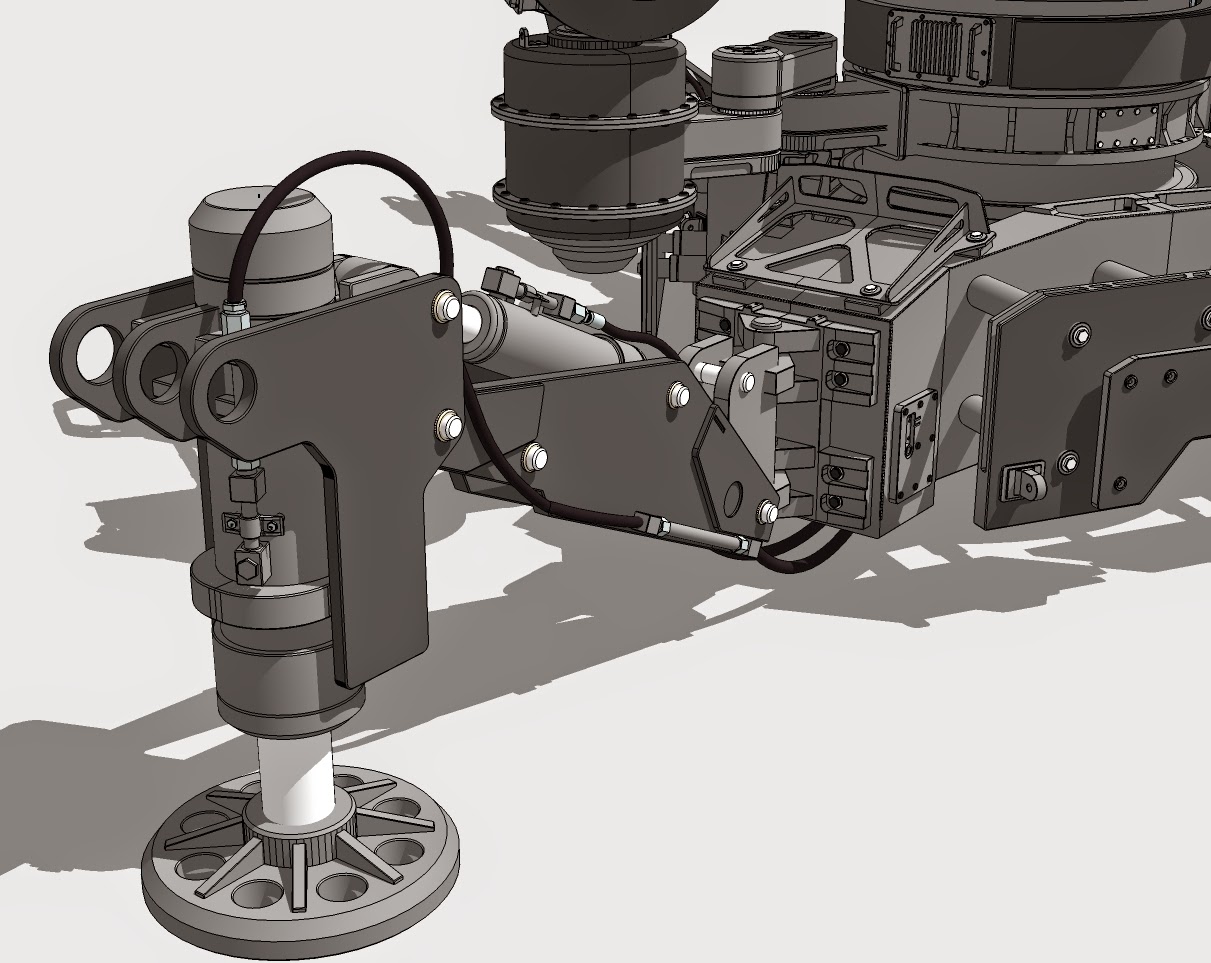 Not enough hours in the day.... You really have to eat into your sleep time to get a suitable amount of work done to be anyway near productive. Last night I closed the lid on my laptop at 2am, a time that I consider late-ish, but not unusual for me. I tend to hang up the Wacom pen around 1am but the finish line was in sight and I wanted to wrap this stage up, so after many late nights and brief lunch time stints I'm happy to say that recording the modelling stage of the design is finally compete! I think I clocked up over 15 hours of recorded modelling, it'll have to be edited down somewhat and played two, perhaps three times actual speed with my voice over explaining what I'm doing. I feel this then necessitates a brief 20 minute real time modelling technique intro, where I cover the basic of the techniques I use, explaining arrays, components, plugins that I use and how to intersect two forms to create cool and interesting shapes. Now the real fun starts, rendering this out and matting it into a plate and painting into a cinematic frame that breathes life into it - and to do this means more late nights.... good thing I love designing and painting! 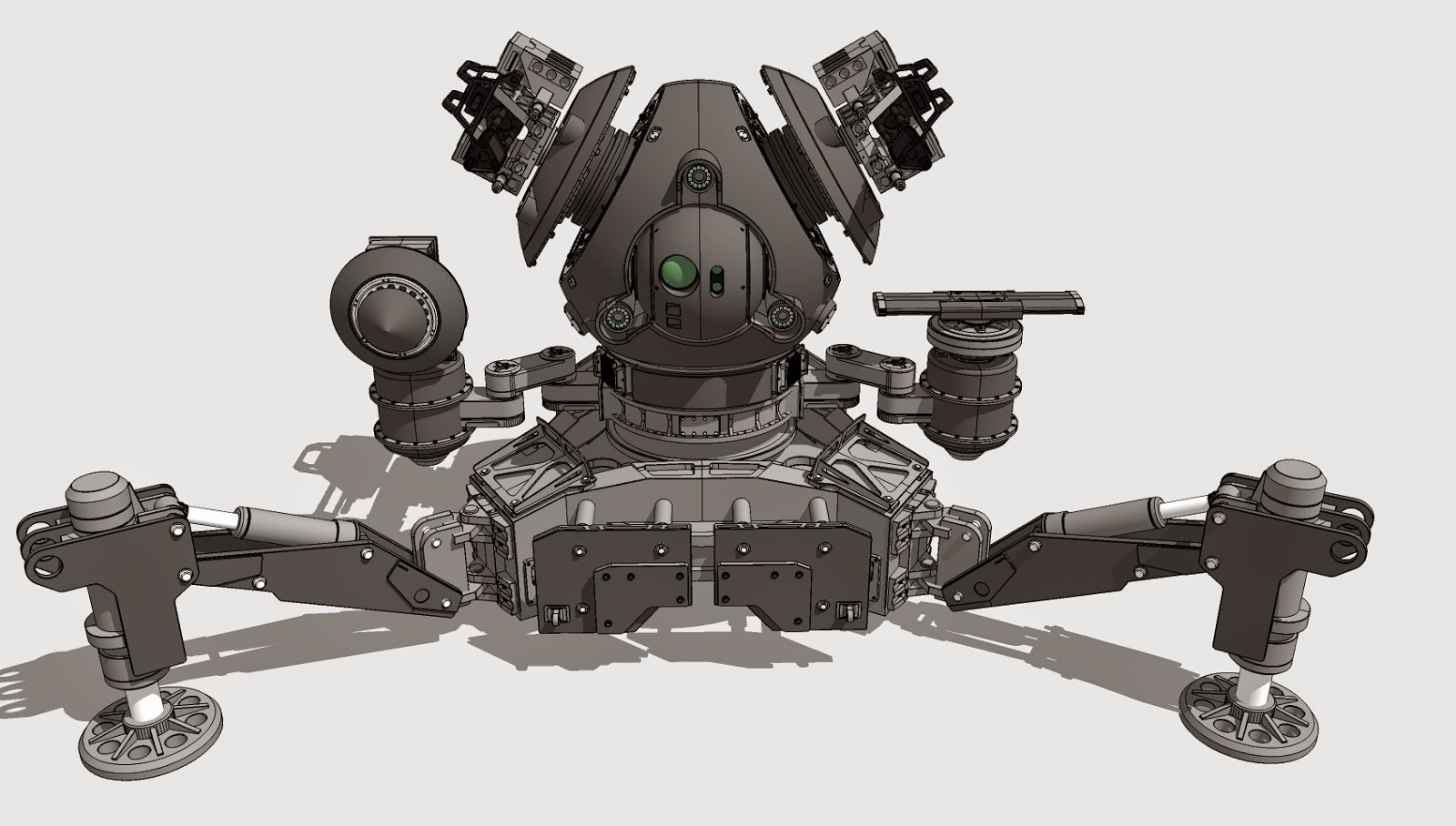 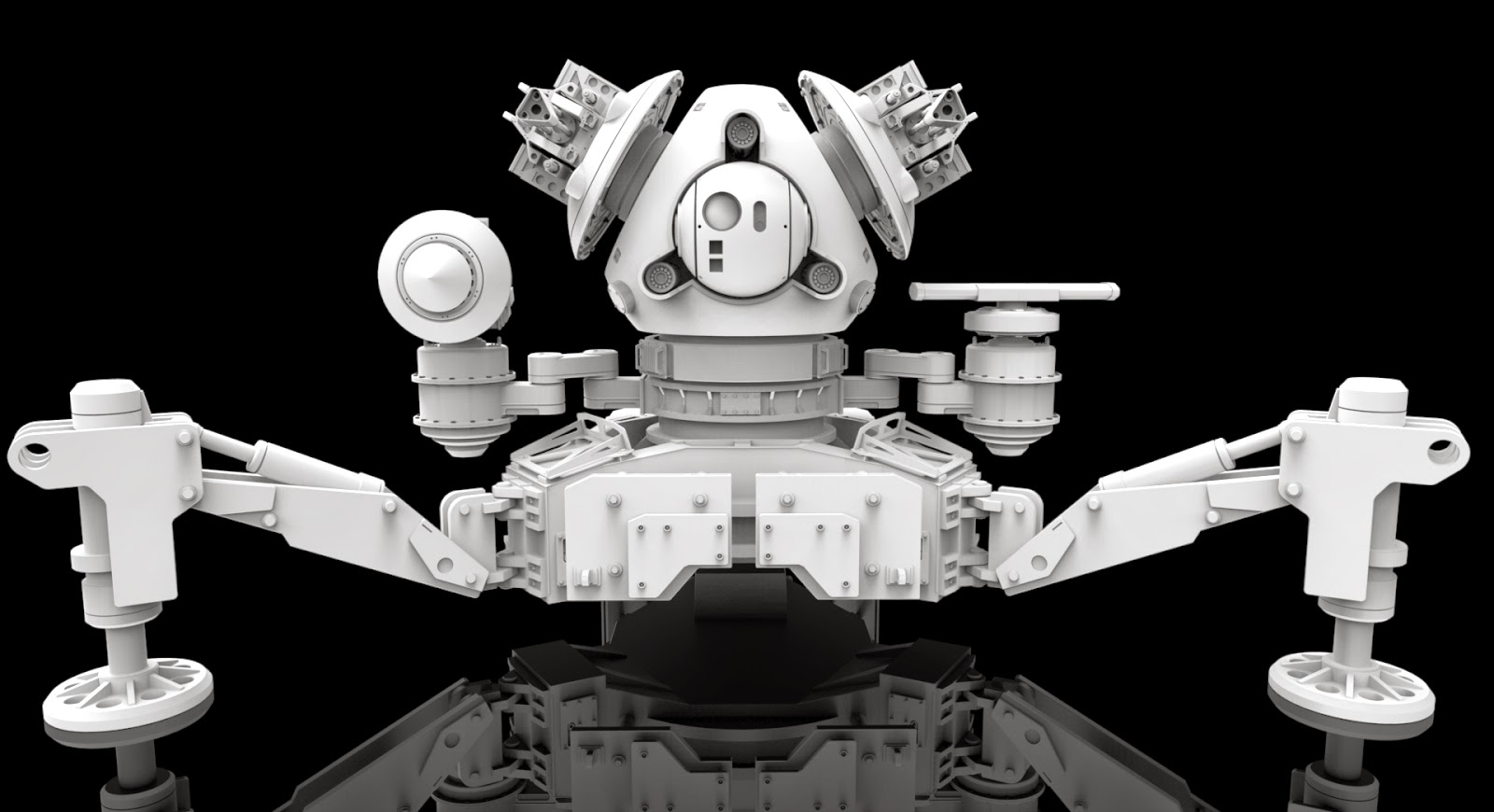